Raphael Kandra, the defending champion, run was ended by the World No.14, Miguel Angel Rodriguez in the semi-final of the British Open 2018. And now Rodriguez will be facing Mohamed ElShorbagy in the final.

Rodriguez was playing against one of the star players of squash, Kandra, but who knew that he would end the winning dreams of the German and will qualify for the final.

Raphael Kandra who was born on October 29, 1990 is a German professional squash player. He turned professional in 2009 and his current ranking in the world is 37. Recently, he won the German Nationals in Feb 2018. 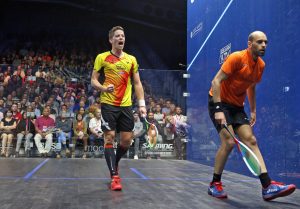 Rodriguez after winning the match said that it was always my dream to reach in the finals of every year and I told it to myself every time at the start of the year, so I am happy to achieve my dreams.

Mohamed ElShorbagy defeated Gregory Gaultier, who was three times British open champion, in the semi-final to reach in the final of the biggest tournament of this sport.

ElShorbagy after winning the match told Gaultier that he missed him a lot. He also said that although, Gregory was injured most of the time this year but he’s a player who keeps on going consistently throughout the season. Despite his injury, he’s one of the best players in the world.

In Women’s Squash, Raneem El Welily, the former world champion will face Nour El Sherbini, world No.1, in the final of British Open 2018.

Nour El Sherbini is a professional Squash player who represents Egypt after she turned pro in 2009. She was the youngest woman who won the Women’s World Championship.

Raneem El Welily is a professional Squash player who represents Egypt after she turned pro in 2002. She recently won World Open in 2017 against Nour El sherbini and won a total of 18 titles in her life.

Nour after winning the match said that Laura was playing too good and the match was tough against her but I managed to win and I am happy to reach in the finals.

Raneem said after the match that she was glad that she qualified for her first British Open. She also said that she wasn’t performing well in the previous seasons but now is the time to win this title.