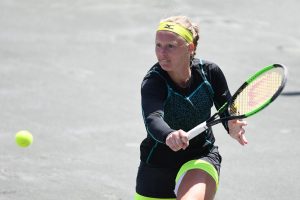 Kiki Bertens held off a championship point to upset world number one Simona Halep and win the Cincinnati Masters. The 26-year-old world number 17 came from behind to defeat Halep 2-6 7-6 (8-6) 6-2 in two hours and five minutes.

Romania’s Halep, 26, has now lost three finals in Cincinnati having previously missed out in 2015 and 2017.

“I cannot find the words for this moment,” said Bertens, who becomes the first Dutch winner at a singles WTA/ATP hardcourt tournament since 2006.

It is Bertens’ first-ever victory over a World No. 1 and her first hardcourt title! pic.twitter.com/6ml1jh7tmr

Bertens’ victory – the biggest of her career – ends a nine-match winning streak for Halep, who triumphed at the Rogers Cup in Montreal, Canada, last week. It also marked her 10th defeat of a top-10 opponent this season as she beat French Open champion Halep for the second time in five meetings.

A clinical Halep dominated the first set, taking just half an hour to take the opener 6-2. And despite the second set quickly swinging in the favour of underdog Bertens, who opened up a 4-1 lead, she then scored just two points as Halep levelled the score at 4-4.

Superb effort from @kikibertens , who saves match point and beats Simona #Halep 2-6 7-6 6-2 to claim the biggest title of her career!

And look what it means to her! Well done! pic.twitter.com/9QT9TfVzxk

The set went to a tie-break and, after scoring four points in a row, Bertens later saved championship point before taking the set. The Dutchwoman once again went 4-1 up in the decider, as Halep conceded 10 successive points, before closing out the match.

“I was a little bit tired, but it was an amazing week,” said Halep.

“Kiki really deserved this title. I have lost three finals here but maybe I’ll be able to win one in the future.”