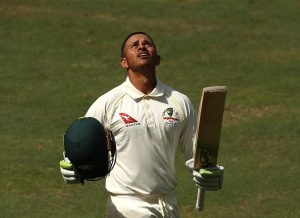 Opener Usman Khawaja hit a battling hundred to thwart Pakistan and help Australia escape with a draw in the primary Test in Dubai.

The left-hander hit a strong 141 to bring up his 7th test century, while the Australian captain Tim Paine remained unbeaten on 61, and Travis Head likewise hit a half century, as Australia completed at 362-8 late in the day with lights going ahead at Dubai stadium.

After Khawaja was expelled with 14.3 overs left and Yasir Shah immediately took the wickets of Mitchell Starc and Peter Siddle, however, Tim Paine and Nathan Lyon proved to be a wall against Pakistani bowling attack and survived the last 12.1 overs.

Man Of The Match: Usman Khawaja

Things getting crazy in the Pakistan vs Australia test match. Who says test cricket isn’t exciting. No one in the stadium but man it’s tense. I LOVE IT #Cricket #livecricket #pakistanvsaustralia #PAKvsAUS pic.twitter.com/hWTp7544rP

What a final day in Dubai!

Read how Australia pulled off a record-breaking survival job inspired by Usman Khawaja’s resilient century to share the honours with Pakistan in the first Test.#PAKvAUS REPORT ?https://t.co/iONJI6RI9b pic.twitter.com/o6CjMgB9nx