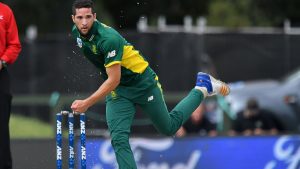 Worcestershire have marked South Africa all-rounder Wayne Parnell on a 3 year Kolpak contract, following his spell as an abroad player this season.

The 29-year-old played from the Worcestershire side that won the T20 Blast out of the blue on Saturday.

What is a Kolpak Deal?

This deal also implies that Wayne Parnell will now not be able to play for his country.

Parnell has played 6 Tests, 65 one-day internationals and 40 T20 matches for South Africa, and last showed up for the Proteas in October 2017.

He has played in the T20 Blast and County Championship for Worcestershire after at first going along with them in July.

If Wayne Parnell never plays another test, he will retire with a test average of 27.6 and a strike rate of 37.0.

Wayne Parnell takes up deal with Worcestershire, effectively ends #Proteas career. Was SA U19 skipper in 2008 when Virat Kohli’s India beat them in the final of the WC. Didn’t quite hit the heights that many expected him to.2nd from that team to go Kolpak after Rossouw #sscricket