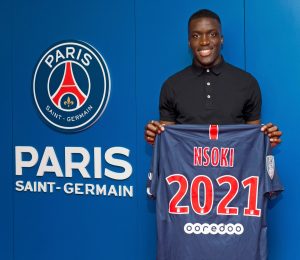 Stanley Nsoki has been given his first professional contract by PSG, after the youngster impressed in his 3 league appearances towards the beginning of the season.

According to reports, the previous France Under-17 international has concurred terms with the club in an arrangement that keeps running until June 2021.

The 19-year-old, Nsoki showed up as a substitute in 2017-18, yet he has risen as a consistent first-team player under Thomas Tuchel, beginning two matches amid the club’s unbeaten beginning to the Ligue 1 season.

The Poissy-born defender developed through the club’s youth framework, before making his presentation in a 3-1 triumph over Caen in December 2017.

Nsoki was left behind Layvin Kurzawa and Yuri Berchiche last season however, Nsoki joined Athletic Bilbao in the late spring, which has enabled him to drive his way into Tuchel’s squad and a place in the beginning XI.

I seriously think you could make a proper wing-back out of Nsoki. Easier to start with a good defensive and physical one and add attacking freedom. But Bernat should be a fine move, I think.

PSG have won every one of the 5 matches towards the beginning of the new Ligue 1 season, scoring an incredible 17 golas and look all set to proceed with their ongoing mastery of French football.

Stanley Nsoki could be in line to include in some capacity in the upcoming matches, as he proceeds with his improvement, yet it is genuinely protected to state that the future looks splendid for the France U-20 international.

PSG keep on growing as one of the greatest superpowers in world football and if Nsoki can keep on impressing when given the shot, he can also draw in enthusiasm from a portion of the other huge clubs in Europe, and alsogain himself a call-up to the France senior squad.

Like Barcelona or Chelsea, PSG will always be contenders. This years squad isn’t quite as exciting as others, but there’s depth, consistency + some older players that will make them difficult to beat. Especially if Bernebe, Diaby, Adli + Nsoki drop down.https://t.co/3XapSXEYU4