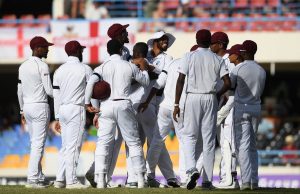 Kemar Roach and Jason Holder took four wickets each as the glorious West Indies tore through fragile England once more to seal a devastating, 10-wicket triumph on day three in Antigua.

England’s expectations of asserting just a second series win in the longest format in the Caribbean since 1968 were broken as they collapsed with a whine for 132 full scale at North Sound on Saturday.

English batsmen were wrecked by pace for the third time in the series, the quick Roach guaranteeing 4-52 and captain Holder 4-43 on a testing track as Joe Root’s side fell docilely from 35 without loss.

Alzarri Joseph likewise struck twice, indicating unfathomable character to play following the passing of his mom prior in the day, as England were just ready to set the Windies a target of 14 to win.

John Campbell scoured salt into England’s injuries by crushing James Anderson for six to win the Wisden Trophy without precedent for just about 10 years with one match to save.

Darren Bravo (50) prior demonstrated the unfaltering application England have needed so severely, diving in for the slowest Test fifty by a Windies batsman and the third-slowest from any country to get the Windies up to 306 – with a first-innings lead of 119.

What a way to finish! With a thumping six, West Indies claim the series with a massive win over Englandhttps://t.co/ueoPldMIa9 #WIvENG pic.twitter.com/DyPV5ePi3m

Jeez. What a shambles. Congrats to Jason Holder & his brilliant West Indies team on a thrilling series win.
They’ve reduced England to a laughing stock. Humiliating for us, fantastic for the wonderful Caribbean people who have their Test team back as a world force again. #WIvENG pic.twitter.com/p4TssiGwXi