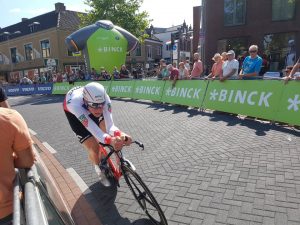 Stefan Kung won stage two of the ongoing Binckbank Tour with an acute display in the time trial race.

In what was generally a close race, Kung annihilated the field by being an entire fourteen seconds faster than the next best cyclist, Victor Campenaerts.

Subsequently, Küng acquired the general lead from Fabio Jakobsen, who despite of winning Stage 1, completed this race at the 101st place at 1 minute 25 seconds.

With @FabioJakobsen the last rider has started his TT. It will be a ‘Mission Impossible’ to keep his leading jersey. “I’m not that good in TT’s”, he confessed yesterday at his press conference. #BinckBankTour

For a second consecutive year, @stefankueng takes an impressive TT victory at #BinckBankTour and moves into the leader’s jersey ?????. Congrats, Stefan! #DontCrackUnderPressure pic.twitter.com/EPqWfNYRpO

More than a second per km to the second fastest pic.twitter.com/jj8VKmHSg6

“I felt like I couldn’t have gone any faster & I also had the impression that I didn’t lose any seconds on any part of the parcours” – @stefankueng on his winning ride on #BinckBankTour stage 2.