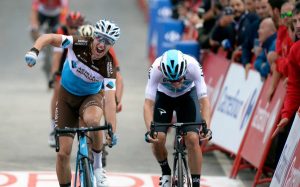 Alexandre Geniez beat Dylan van Baarle to triumph in a breakaway dash on Stage 12 of the Vuelta an España 2018, while Simon Yates lost his overall lead to Jesus Herrada.

Down goes Yates! Did not expect that, but Jesus Herrada, a member of the break away that got 11 minutes ahead of the peloton, takes the red. Yates still in second, but over three minutes behind https://t.co/Uvu7JKdUeT

Alexandre Geniez wins stage 12 of the Vuelta a Espana, as Jesus Herrada becomes the 88th Spanish rider in history to don the leader’s jersey.

According to my latest dream, Alexandre Geniez will win Lombardia on a strade bianche descent. Wearing an Amore & Vita kit. Seems legit.