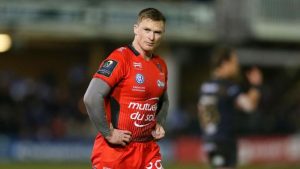 Chris Ashton’s expectations of an arrival to the England squad have endured a blow after it was affirmed his 7 week boycott will now keep running until 15th October.

The 31-year-old was discovered liable of an unlawful tip-tackle in Sale’s pre-season diversion against Castres on 17 August. The boycott initially secured the last pre-season game against Sale FC and the initial six rounds of the Premiership.

Since that was cancelled, Ashton would not play until after England’s worldwide squad is named.

He will likewise miss Sale’s first European Challenge Cup coordinate against Perpignan, having got an additional week over the standard 6 week punishment for his “poor disciplinary record”.

Dates of Chris Ashton’s suspension moved – he will now not play before England’s autumn squad is named.
The change was made after @TimesSport revealed Sale had included a cancelled friendly on the fixture list submitted to the panel.
Sale will not face RFU action for mistake.

His past suspensions incorporate a 13-week boycott for biting and a 10-week suspension for eye gouging, both of which happened while playing his club rugby for Saracens.

Ashton, who has 39 caps for England, spent last season at French side Toulon following 5 years at Saracens, with whom he won the Premiership and Champions Cup.

The RFU has accepted Sale’s version of events, that the inclusion of the cancelled fixture on the list was a mistake. The full judgement may reveal whether Sale had to explain how it happened.