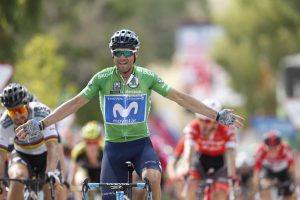 Alejandro Valverde asserted his second triumph of the 2018 Vuelta an España, pipping Peter Sagan to the line in a sensational tough run in Almadén toward the finish of stage 8.

Danny van Poppel, whose LottoNL-Jumbo team had ruled the precarious last kilometer – which additionally incorporated a close to 180-degree curve on a circuitous – completed a more inaccessible third.

Rudy Molard completed securely in the principle gathering to hold his general lead, however the 10 extra seconds for arrange triumph moved second-put Valverde to inside 37 seconds.

Alejandro Valverde hasn’t finished outside the top 50 of a bike race in two and a half years.

Alejandro Valverde is the 18th rider, and the only active one, to have won multiple stages in at least three different instalments of the Vuelta a España. #Vuelta2018