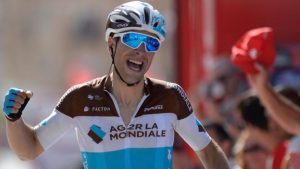 As the residue settled on stage 7’s ruthlessly eccentric finale, Tony Gallopin won the stage 7 while Alejandro Valverde emerged as the best-put cyclist of the Vuelta an Espana’s best contenders, moving from fifth into second behind Groupama-FDJ’s Rudy Molard.

Since the Vuelta began last week, Movistar’s legitimate line is that Nairo Quintana is their principle, GC pioneer and Valverde’s triumph on Stage 2’s tough finish in Caminito del Rey was so generally expected, there was no hypothesis despite what might be expected by then.

In any case, Valverde’s solid appearing at the considerably more precipitous stage completing Alto de Alfacar  proposed that the Spaniard was in fantastic climbing structure and – in the wake of advancing marginally in the finale – his GC choices stayed flawless.

Presently, after stage 7’s rollercoaster finale, Valverde not just took some extra seconds in a late problem area dash yet additionally asserted third on the stage, climbing to second in the general rankings. Regardless of whether he is not taking a gander at the general grouping, his choices here are at present fit as a fiddle than any of the other best names.

Having gotten through a finale laden with risks where the accidents and time holes spread among the GC top picks like fierce blaze, one result is that Valverde has picked up time, most remarkably on Michal Kwiatkowski , one of the most exceedingly bad influenced in the accidents, who dropped from second to fifth.

#LaVuelta18 Tony Gallopin (AG2R) holds on for the solo win with @jackhaig93 & @SimonYatess both crossing the line together in the first chasing group only seconds behind Gallopin. Great work in an action packed finale????
? @GettyImages pic.twitter.com/YcmO8N9GqG