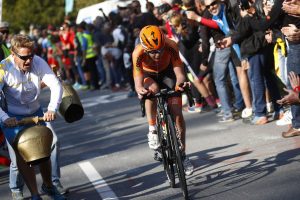 Anna van der Breggen of the Netherlands guaranteed a devastating triumph in the women’s cycling race at the World Road Championships in Innsbruck, Austria.

The 28-year-old, Olympic victor, assaulted with very nearly 40 km remaining of the 156.2 km course to win by 3 minutes 42 seconds from Australia’s Amanda Spratt.

PERHAPS Even more Impressively, Annemiek @AvVleuten STILL managed to take SEVENTH place, after injuring her knee in an early fall, severe enough to be wheeled off to Hospital after race pic.twitter.com/pMkl9mU9JC

Rowe’s ride was not without show, having been engaged with an accident including Dutch rider Annamiek van Vleuten and following that, she had to suffer an issue with her cycle chain.

What a show, and a showdown! 2018 UCI Women’s Road Race World Championship an epic race.
?@AnnavdBreggen
?@AmandaSpratt
?@TatianaGuderzo
So proud for Spratty and @CyclingAus , so well deserved for Anna & Netherlands, Olympic and now World Champion. pic.twitter.com/hCaWRbCYWV