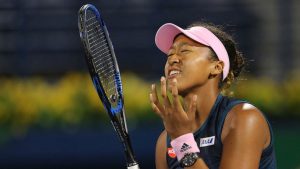 Defending champion Elina Svitolina was among those to advance at the Dubai Tennis Championships as Naomi Osaka was the prominent name to crash out on Tuesday.

Osaka, who declared a week ago she had parted from mentor Sascha Bajin, was shocked by Kristina Mladenovic in her first match as world number one, lost in straight sets in a little more than a hour after a not-so-great display of tennis.

In any case, most of alternate seeds in the draw advanced, including Svitolina and Simona Halep, who breezed past Eugenie Bouchard.

Petra Kvitova and Angelique Kerber both played each other once more from early deficiencies, while Karolina Pliskova beat Dominika Cibulkova, with Garbine Muguruza facilitating to triumph over Zheng Saisai.

A few seeds joined Osaka in leaving, with Kiki Bertens withdrawing after thrashing in a third-set attach break to Viktoria Kuzmova, while Caroline Garcia went down to Jennifer Brady in straight sets.

Osaka looked a sad remnant of her typical self as she was beaten in her first match since the Australian Open.

The best seed never got moving and, regardless of breaking a few times in the second set, got herself helpless to hold fill in as Mladenovic asserted a well known triumph.

No cause for concern from @Naomi_Osaka_ following her loss is Dubai, she’s already looking ahead to Indian Wells—> https://t.co/EwzhRtiLrI#大坂なおみ pic.twitter.com/IZDLwedc8J

Naomi Osaka admits the extra attention that has come with her success has not been easy to handle. Says she is someone who generally feels more comfortable without any attention on her. She teared up when trying to describe what being under the spotlight has been like for her.

“I don’t really like attention”: an emotional Naomi Osaka speaks about the spotlight from her rapid rise, following her opening-round loss in Dubai. https://t.co/h5C5Q0hLqZ pic.twitter.com/HkT8QcTsrw