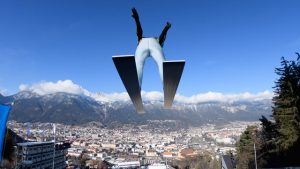 The 2016/17 FIS Ski Jumping World Cup presented by Viessmann was an outstanding winter for the world’s best ski jumpers which featured many magic moments.

The final test for the upcoming Olympic Winter Games in PyeongChang (KOR) provided the athletes with a taste of what to expect next year. In addition, there was the traditional 4-Hills-Tournament and the FIS Nordic World Ski Championships in Lahti (FIN), which was a true season highlight.

Furthermore, on the men’s side, the premiere of the Raw Air Tournament in Norway proved to be a big success. The first edition of this series had events in Oslo, Lillehammer, Trondheim and Vikersund and enthused athletes, fans and spectators alike.

For the first time, a ladies’ World Cup event was staged on the large hill in Oberstdorf which saw Sara Takanashi (JPN) winning both competitions. Meanwhile, at the competitions in Ljubno (SLO), fans were able to witness the first German podium sweep in the history of ladies’ Ski Jumping with Katharina Althaus, Carina Vogt and Svenja Wuerth. Furthermore, Yuki Ito (JPN) won all three events on her home hills in Sapporo and Zao.

On the ladies’ side, Sara Takanashi took the overall crystal globe for the fourth time after 2013, 2014 and 2016. She won nine of the 19 individual competitions, but this year, the 20-year old had to fight hard for the win as her teammate Yuki Ito and Maren Lundby (NOR) claimed their first World Cup victories and a number of podium places.

17-year old Domen Prevc (SLO) surprised the crowds winning four World Cup events and leading the overall World Cup standings for a number of weeks at the beginning of the season. In the end, he finished in a strong sixth position and together with his brothers Peter and Cene, he provided many headlines for the media during the winter.

On the ladies’ side, 19-year old Manuela Malsiner (ITA) took the first ever World Cup podium for Italy at the competitions in Zao and a few weeks later, she won the individual title at the Junior World Championships in Park City (USA).

The story of the season came from Olympic Champion Carina Vogt (GER) who returned to the World Cup podium in Ljubno after a two-year drought. At the World Championships in Lahti, the “phenomenon” was back in her element as she took gold medals both in the individual and team event.

An interview with Domen Prevc after his win in Lillehammer (NOR) in December 2016 turned out to be the most popular video, followed by the award ceremony in Zakopane (POL), where 40’000 fans sang the Polish national anthem after Kamil Stoch’s win.