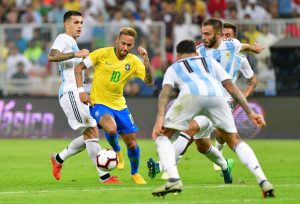 So an Inter player scored today in the Brazil vs Argentina match.. Oh yeah, Icardi? No.. Martinez? Nope.. Miranda!!!! ⚫️?

Congrats to Brazil! And also to my favorite team even they didn’t win tonight but I’m always proud of them ????❤️

Brazilian centre-back Miranda was the stoppage-time hero for Brazil as his header gave the “Selecáo” a 1-0 win over Argentina in a low-key Superclasico de las Americas clash.

For more updates about Brazil Vs Argentina keep visiting allsportspk