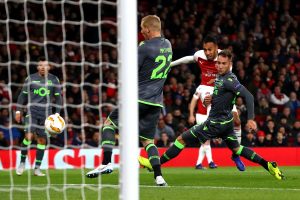 After a lengthy delay, it’s going to be a sad end to tonight’s game for @DannyWelbeck…

Welbz is substituted to the sound of Emirates Stadium chanting his name ?

We’re all hoping for the best for you, Danny ?

@MatteoGuendouzi officially my new favorite player at Arsenal. The fight, passion, and quality on the ball are unmatched. Not only does he seem to be a player who grabs the game by the scruff of the neck, to try and make things happen, he also cares for his club and teammates.

Arsenal progress into the last 32 of the @EuropaLeague but at what cost?

Danny Welbeck [ankle] will miss the remainder of the year [at least].

Lichtsteiner [muscular] was also forced off. Emile Smith Rowe looked to have picked up a knock as well. #AFC pic.twitter.com/rYPvzZlMuq

A frustrating evening for Arsenal at the Emirates Stadium. pic.twitter.com/Ed2U2ZKuT9

Arsenal have failed to score for just the second time under Unai Emery.

Not their usual selves. pic.twitter.com/wWbTQREos2

Danny Welbeck carried off on a stretcher with a leg injury during @Arsenal‘s Europa League match with Sporting Lisbon #SSN pic.twitter.com/65n99YN6KG