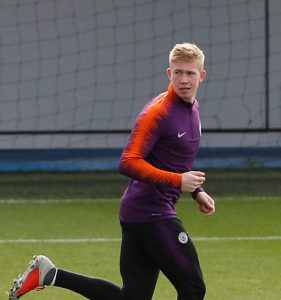 Manchester City’s Kevin de Bruyne has made a comeback to training sooner than anticipated, following his knee injury, earlier this year.

The world-class midfielder picked up a lateral collateral ligament lesion in his right knee, and was expected to out of action for 3 months.

?️ Lots of talk around what the best combination is as far as Salah, Kane, Hazard, Sterling and Mane.

Just wanted to remind everyone that a £9.7m priced Kevin De Bruyne will be returning to training in the next few days. ?#FPL

In any case, the Belgium national, did not require any surgery, and is now gearing up for the next match of Manchester City, which is against Hoffenheim in the Champions League.

Prior to his unfortunate injury, the 27-year-old De Bruyne, made only a solitary appearance this season, which was as a substitute in City’s opening-day triumph upon Arsenal.

Man City midfielder Kevin De Bruyne has returned to training six weeks ahead of schedule. He is now available for selection.

Additionaly, Kevin De Bruyne helped Belgium complete third at the World Cup in July, the nation’s best ever finish at the competition.

Kevin De Bruyne has returned to Manchester City training, 6 weeks ahead of schedule. Whatever the City doctors are giving their injured players is working great. pic.twitter.com/zCNs8yXfYH

“It’s difficult to quantify how much of a loss [Kevin De Bruyne has been]. He is one of the best midfielders – we get more goals and assists with him. Luckily we have players to fill the gap.”