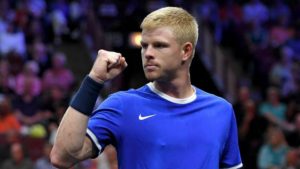 English number one Kyle Edmund battled once again from a set down, to achieve the 2nd round of the ongoing China Open with triumph over Peter Gojowczyk.

In a battle that only lasted 91 minutes, Edmund, who is placed 5th in the world, sealed victory with a 3-6, 6-1, 6-2 win, against the world number seventy in Beijing.

5th seed Kyle Edmund rallied from a set down to beat Peter Gojowczyk 3-6, 6-1, 6-2 in their opening round tie at the China Open #SSTennis

The world number 16 is playing his first competition, since his US Open first-round misfortune in August.

Illness and the repeating episodes of tonsillitis, has made it a tough year for the 23-year-old.

Kyle Edmund had been in good form lately, as prior to making his trip to China, the tennis player had been a vital part of Team Europe, that beat Team World in the Laver Cup 2018.

In his first service game, Kyle Edmund was already 3-0 down, courtesy of a few unforced errors, after which he made a comeback by recovering the set to 3-2.

Be that as it may, Gojowczyk looked in prime shape, as the German broke again, which allowed him to get a 5-3 lead, and in the end it was converted into his 1st set point with an ace.

However, this is when Kyle Edmund came into form, as in the 2nd set he broke the German 3 times, as he converted the second of 3 set points with an ace.

And, finally in the 3rd set, the key break was asserted by the Briton with a 3-2 lead, as he continued towards victory, with an ace.

In the next round, Kyle Edmund will either face Argentina’s Leonardo Mayer or Italian qualifier Matteo Berrettini.

Kyle Edmund starts Beijing with a good win, beats Peter Gojowczyk 6-2 in the 3rd. Dangerous opponent to start off with on a faster hard-court surface, but the British No.1 makes the 2nd round, his first win since Winston-Salem back before the US Open. #atp #Beijing