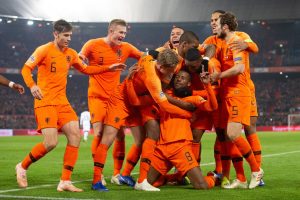 Netherlands trashed France, who tried to play like on the WC. No chance against a young and offensive Dutch squad. Thank you @RonaldKoeman. #NEDFRA #worldchampions?

I can’t believe #France lost to #Netherlands… I guess champions take a break too as I said… was #Pogba the difference ??? goodnight

Germany have been relegated without even playing.

A Netherlands victory over France sees Germany drop down to the second tier of the Nations League. ? https://t.co/X05KfRyLo1 pic.twitter.com/8xmWKtraUn

Netherlands win to relegate Germany The Netherlands kept their UEFA Nations League hopes alive with a 2-0 victory over world champions France in Rotterdam, relegating Germany to League B in the process. https://t.co/Ny3bNyQ9Lt