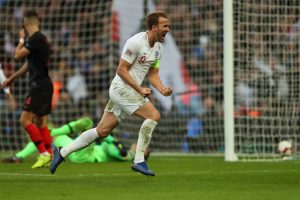 BREAKING: @England have qualified for the semi-finals of the @UEFAEURO Nations League after coming from behind to beat Croatia 2-1 at Wembley, the goals coming from Jesse Lingard and Harry Kane. #SSN pic.twitter.com/lgaws5Ts8l

England go through to the UEFA Nations League semi-final…

@DLovren6 In #Spain we are now celebrating #England victory, and #Croatia´s downgrade to second division of #UEFANationsLeague. Who´s laughing now? Shut up, and think before you act. Your great team do no deserve people like you. RESPECT #englandcroatia @DejanLovren_

Croatia joins Germany, Poland and Iceland in the countries relegated from Uefa Nations League A pic.twitter.com/xT8QStjkwE

? Leads @England to a @FIFAWorldCup semi-final.

UEFA have a bit of a sweat on here. England don’t do well, the Nations League becomes tin pot. Do well, bigger than ’66.