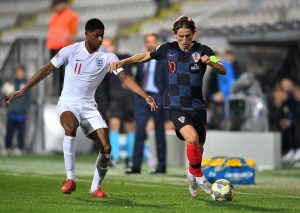 Fair play to that small, loyal group of England fans who travelled all the way to Croatia to watch a behind-closed-doors UEFA Nations League game on top of a nearby hill.

Well, Croatia may have beaten England to a place in the World Cup final, but after the Three Lions hold them to a goalless draw in front of an empty stadium in the Uefa Nations League, it’s easy to see who’s had the last laugh.

Well that was the first and maybe not the last senior @England international behind closed doors. #CROENG #NationsLeague @UEFAEURO @SkyFootball

Every player on the pitch in opening 45 minutes of Croatia vs England had more touches than the number on their shirt; Harry Kane was the closest to not doing so: 10 touches (fewest on the pitch) vs. #9 on his back.

Not much else we can do with that first half… pic.twitter.com/dcKMBN50XB

The fans locked out of Croatia v England might be the lucky ones so far.

The silence in this Croatia vs England match with no supporters is like watching a Man City home match.