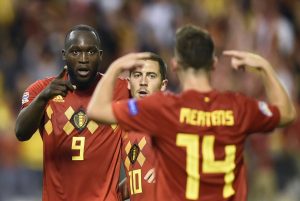 Romelu Lukaku has now scored 2+ goals in 8 of his last 18 games for Belgium:

Lukaku leads Belgium past Switzerland with a brace : Romelu Lukaku scored both goals in Belgium’s 2-1 win over Switzerland which gave the Red Devils the lead in Group 2 of Nations Cup Division A. https://t.co/I9QH2TjYHh pic.twitter.com/TppNLCPfJR

Belgium made it 2 wins from 2 following a 2-1 victory over Switzerland in Brussels, thanks to Romelu Lukaku’s double UEFA #NationsLeague #SSFootball