Allsportspk continues its buildup to the FIFA World Cup in Russia this summer. The series will aim to educate readers about the history of this prestigious competition and give them insightful information.

The build-up to the FIFA World Cup, which is held every four years, is unlike that of any other tournament in the entire world. The anticipation, the excitement and the expectation is off the charts. Simply put, the tournament completely engrosses football fanatics in every part of the globe who try to embrace the tournament as best as they can.

One of the things that supporters look forward to most is the release of the official kits a few months before the tournament kicks off. The kits mean different things for different fans. For casuals, they are a way of representing their team and something for them to get into the spirit of the occasion. For diehard fans, the kits represent everything: the passion, the pride, the identity.

In this article, we have picked four iconic kits which always come to our minds when we think about the FIFA World Cup. 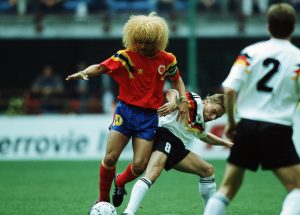 The Colombian national team took part in the FIFA World Cup in 1990 after a 28 year absence. The star of the returning team was, none other than, the legendary Carlos Valderrama. During their run to the last sixteen, Valderrama’s funky hairstyle and his talent became the center of attention. Furthermore, Valderrama’s hairstyle matched well with the colorful kit he wore with so much class. The graphic pattern of the kit is a thing of beauty and has led to it becoming one of the most loved of all time. In fact, this year’s Colombia kit has incorporated much of its design. 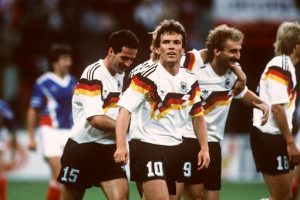 Die Mannschaft famously didn’t wear colored kits for first 82 years of their international football history. It was in 1990 that the Germans introduced their first non- black and white kit. And it was an absolute masterpiece. It was so good that The Telegraph couldn’t help but say that, “its scheme and design renders the team perfectly: menacing, functional and with just enough flair to excite.” The German team did the shirt justice as well and went to win the Italia ’90 tournament. 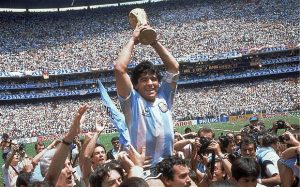 The 1986 Argentina kit is not much different to those after and before it. It was simply made famous by one of the greatest performers to ever grace the football world. That man was the phenomenal Diego Maradona. His performance at the 1986 tournament is something which has its own place in footballing history. His talent, will to win and aura almost singlehandedly propelled Argentina to World Cup success. Simply put, it was the greatest performance in the World Cup’s gloried history. And that is the reason why this kit is something truly extraordinary. 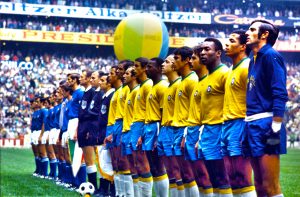 The Brazil kit is one of the most well-known sports kits around the world. The striking yellow kit has become a part of Brazil’s and football’s identity. In fact, such has been its class and popularity that the kit manufacturers have never tried to change it or tweak it much at all. The kit has looked almost identical throughout every World Cup and still looked absolutely gorgeous. The 1970 Brazil kit is a little bit extra special, however, as it was the first Brazil kit the world got to see live on television and was worn by a spectacular team led by Carlos Alberto. The team also included one of, if not the, greatest footballers of all time, Pele. Hence, it is no surprise that it ranks high in most people’s ‘favorite kits of all time’ lists.