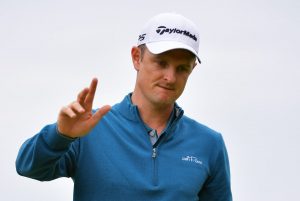 Justin Rose got the lead at the BMW Championship, with a six-under 64 in the 3rd round to get to 17 under on Saturday. Rose was among the numerous golfers to exploit the moist conditions after heavy rain early in the day.

Rose birdied four of his initial 5 holes on the way to a six-under 29 on the front nine. He at that point, made par at each hole on the back nine, yet at the same time held onto his lead.

In search for his 2nd win of the season, Rory McIlroy shot a long birdie to putt on the eighteenth green to shoot a seven-under 63. He completed the day tied for second at 16 under. In round 3, Rory had seven birdies, an eagle and a double-bogey.

The last time Justin Rose had a 54-hole lead at Aronimink, Carl Pettersson and Charlie Wi were his closest pursuers.

He gets Rory McIlroy and Xander Schauffele this time.

Meanwhile, previous year’s Tour Championship victor and a rumored contender of the upcoming Ryders cup, Xander Schauffele shot a three-under 67 to complete tied with McIlroy at 16 under. He missed his last hole to play himself out of the last gathering on Sunday.

Tommy Fleetwood and Rickie Fowler head into the last round tied for fourth at 15 under. Fleetwood got into contention, by scoring his second in a row eight-under 62.

An emphatic finish for @McIlroyRory.

Tiger Woods shot a four-under 66 on Saturday to complete the day tied for eleventh at 12 under.

In the wake of affliction through a two-hour climate deferral to begin the third round, players may need to endure another on Sunday, as climate conjectures call for no less than two more inches of rain.