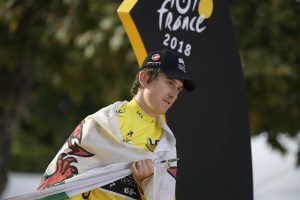 Another 3-year contract has been signed by the Tour de France champion, Geraint Thomas who has decided to continue riding with Team Sky.

Geraint’s previous contract was set to expire towards the end of 2018, and the cyclist had various offers on the table from different cycling teams. However, the Welshman chose to mark an agreement on enhanced terms with Team Sky.

Thomas uncovered in 2017 that he would tune in to offers from different groups, and his Tour de France triumph this late spring elevated the market value for the rider.

The new Polish-supported CCC WorldTour group made him an offer, with sports chief Piotr Wadecki saying he needed to construct his Tour de France group around Thomas.

Despite the fact that his situation as group pioneer is not sure, Team Sky principal Sir Dave Brailsford had been “pretty positive” his kindred Welshman would remain.

The Tour de France champ, Geraint has said he would not have any issues about working close by 4 time Tour de France victor Chris Froome. As, he hopes Froome to be edgy to recover his crown one year from now having come third behind the Welshman in the current year’s version.

Good to see @GeraintThomas86 committing to stay @TeamSky for another 3 years! Just hope he gets a good crack at being team leader in more grand tours! #TeamSky ???????

Astana driving it on the front of the Vuelta. In fact they’re trying to emulate Sky so much just now they’ve just signed Geraint Thomas for 3 years.