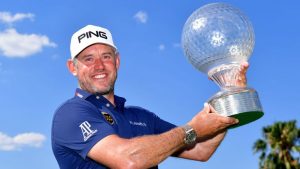 England’s Lee Westwood shot a dazzling eight-under-standard 64 to win the Nedbank Challenge – his first triumph on the European Tour after 4 years.

The previous world number one took the altogether lead from Louis Oosthuizen with a birdie at 17, finishing the back nine of every 31 to complete on 15 under.

The South African’s test blurred as he completed third on 11 under behind Spain’s medium-term pioneer Sergio Garcia.

And that should do it for your 2018 #NedbankChallenge champion Lee Westwood…scorching eight under final round deserved to win the tournament. Cool as ice on a scorcher at Sun City to close it out. pic.twitter.com/N0yvwQveM0

Westwood, who carded six birdies and a falcon on the second gap in his round, celebrated with caddie and sweetheart Helen Story in the wake of holing a putt on the eighteenth.

The win was Westwood’s 24th on the European Tour and his third at the Nedbank.

Oosthuizen checked a 69, with a damaging bogey on the fifteenth and after that completing with twofold bogey on the eighteenth.

An emotional Lee Westwood fought back the tears after ending his victory drought at the Nedbank Golf Challenge. https://t.co/kMn3H1KpEt pic.twitter.com/r2CObUrEG8

Garcia hit a 70 as his two-shot lead from cycle three vanished.

Britain’s Ross Fisher (70) was fourth on eight under, a shot in front of countryman Matt Wallace (67).

4-time major champ Rory McIlroy (71) completed in a tie for 21st on one under.