This is the last four matches of the Premier League, Match Day 12 of 38. The highlights are appended below the points table.

Match 7 of 10: Liverpool vs Fulham 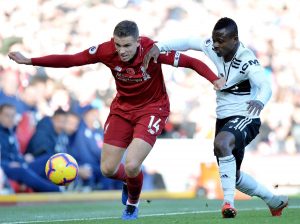 With 9 wins and 3 draws, @LFC have earned 30 points after 12 league matches of the season – their joint best start to a @premierleague campaign#LIVFUL #PremierLeague pic.twitter.com/g0VHfYwt0J

@premierleague The quick take by alisson leading to Liverpool goal .that was a rolling ball.the referee should have stopped it to for to be retaken

City Chelsea Liverpool all contenders with latter two on similar points and city two ahead, we play the best counter attacking football, but we need luck as a club after that horrible slip of gerrard taking away our first premier league title

Jurgen Klopp has admitted Liverpool had Lady Luck on their side in their 2-0 defeat of Fulham that sent the Reds to the top of the Premier League. A goal in each half from Mohamed Salah and Xherdan Shaqiri secured Liverpool all three points against a.. https://t.co/lJiNIHyHXL

Liverpool could go the season unbeaten and still not win the league, every time we have had an exceptional season, someone else has been even better. Story of the premier league era for LFC.

Only three fixtures in Premier League history have seen 8+ goalless draws – Everton are involved in all three:

Liverpool so close yet again to the November premier league title. They must be kicking themselves ??‍♂️

Jordan Pickford made four saves to earn a clean sheet for Everton as Chelsea were unable to break through in a 0-0 draw. English Premier League: Willian (60′) Chelsea 0-0… https://t.co/KVvnDvPFAA

.@ChelseaFC down to 3rd in the @premierleague standings after a scoreless draw with 9th-placed @Everton at Stamford Bridge on Sunday evening#CHEEVE #PremierLeague pic.twitter.com/woU0hzKkEh

Maurizio Sarri’s unbeaten start to life in English football is now the longest in Premier League history. The Chelsea manager stretched his remarkable run to 12 league games with a frustrating 0-0 draw at home to Everton on Sunday. He overtakes Frank.. https://t.co/oUTAx2oZfR

And that’s it for another two week ,nations league making premier league a joke,only played 12 games ,3 international breaks,get the players back in fortnight then they have to start again

A match that Chelsea Football Club ? should have won, but instead it ended with a goalless draw 0-0 ?
So far 12 Premier League matches = 8️⃣ wins and 4️⃣ draw#cfc . pic.twitter.com/IyIGEZeTgb #CFC 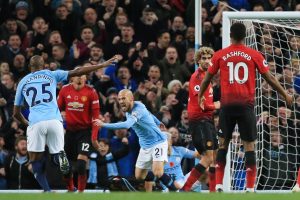 “It was a good performance against a top, top team. Now we can feel good; we’re scoring lots of goals, creating lots of chances and we’re in a rhythm”

I agree our defence is shocking, to be fair the whole squad is. All I’m saying is De Gea has no confindence this season so why start him? Where as if you start a reserve keeper if you will then maybe he will rise up to expectations as he wants to prove a point.

Yeah, that’s a strange one. For whatever reason that front three of Liverpool are not clicking like they were last season. We had to freshen it up because the players were burnt out by Conte, he worked them too hard lol. Liverpool will push City the most but it will be tricky. 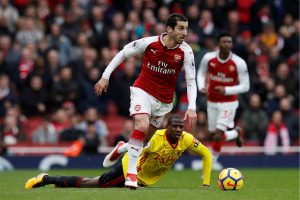 Played great against Liverpool just thought we needed to turn up today very poor ref was shit letting all the time wasting go but can’t blame them doing that we need a winger badly #arsenal #ARSWOL #PremierLeague gotta go to work now until 6am and my headphones have broke pic.twitter.com/cQR0OxUJxP

Exactly why I said Arsenal were awful. Finishing chances is a part of a good performance though and Wovles didn’t do that.

Seeing as the next Spurs premier league match is against Chelsea, then the following week Arsenal, with the not-so-small matter of a match with Inter Milan in between, I’m gonna need this kit more than ever ??? @rupertgray

Mate, if you look at the Wolves Twitter page, almost all of Arsenal fans agreed that Wolves were by far the better side and deserved the win had it not been for Leno. Congratulations for assembling a quality squad. May you lot be a permanent Premier League side.

So that’s it. The Premier League is done for everyone. Game Over. ?. Completed. The end. Gone. Done. Bye bye. Finished. Chelsea, Arsenal, Spurs, Liverpool, Man United, Thanks for coming and try next season. pic.twitter.com/guHbGX4dhH

@MatteoGuendouz you are a brilliant, up-in-coming player you fit straight into the premier league and your only 19years of age, and your only going to improve?? i hope you continue to stay with us (Arsenal)…??

To have any chance of making the top4 United would need to beat Chelsea, Liverpool, Arsenal and Spurs- hope and away. I just cannot see that happening with these players and with teh negative set up of teh manager