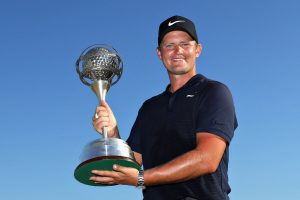 Tom Lewis produced the biggest 54-hole comeback of the season to win the Portugal Masters for the second time at Dom Pedro Victoria Golf Course.

The Englishman fired an opening 72 on Thursday to sit nine shots behind first-round leader Lucas Herbert but rounds of 63 and 61 meant he was just two behind the Australian heading into the final round in Vilamoura.

An enthralling Sunday saw the event come down to a three-way battle between Tom Lewis, Herbert and England’s Eddie Pepperell, with Tom Lewis firing a 66 to get to 22 under and finish three shots clear of his two rivals.

Tom Lewis won this event in 2011 in just his third start as a professional and arrived this week in fine form, having finished first and third the past two weeks on the Challenge Tour.

In between he needed a trip to the Qualifying School in 2016 to regain his card but he is now back in the winner’s circle after a brilliant weekend on the Algarve.

He birdied 24 of his last 54 holes to match Li Haotong’s season’s best at the Omega Dubai Desert Classic and went 45 holes without a bogey between the last on Thursday and the tenth on Sunday.

Incredible stuff from Tom Lewis. Seen that guy go through some shite over the last few years! Great week also for @lhgolf5 ? … I’ll buy you a beer next time I see you ? #itsonlymoney Thanks to all for the support and let’s go Europe I guess ??????‍♂️

“It’s unbelievable,” he said. “I’m so happy, it’s been a rough ride but this week I played hard. I obviously got off to a bad start, to finish the way I’ve been finishing has been brilliant so I’m happy.

“To be back here in Portugal and play the way I played and to have the crowds we had, I feel great right now. I think this one means more, it means a lot to come and win this again. The next win was always going to mean more because of how much I work for it.

“Hopefully I can do better than I did last time and continue to do what I’ve been doing with the team that I’ve got and the support and not ease off the gas and keep pushing forwards. That’s what I did this week after a few good weeks recently.”

I think it’s fair to say @TigerWoods is back and he’s not going anywhere! But we’ll done Tom Lewis in Portugal and of course @JustinRose99, world number 1 and @fedex Cup Champion!

Pepperell hit the pin as he spun his approach into the second to set up a birdie and that was just two back after Herbert bogeyed the second.

Tom Lewis holed a long putt on the second to hit top spot and the leading duo were soon three ahead after both hitting excellent approaches into the third.

Pepperell played a nice chip to birdie the par five fifth for the fourth day in a row and get back within two but that was soon three back again as both of the leaders made the most of the same hole.

Herbert got a slice of luck when his third hit the pin when it looked certain to race over the green, while Tom Lewis got on in two and two-putted.

Golf – Tour Championship ’18: Tiger Woods On The Verge Of A Famous Win

Pepperell dropped a shot ahead at the seventh but regained it at the next after a stunning tee-shot to four feet on the eighth.

That was four back when Tom Lewis made an 18-footer on the same hole and while the 27 year old made a first bogey in 46 holes on the tenth, he hit back from ten feet on the 11th.

Pepperell had hit a wonderful approach into the 11th for a birdie and when he made it two in a row from six feet on the par five 12th, he was just two behind.

Herbert had made seven pars in a row, needing a string of six-to-ten foot putts to keep in touch but he broke that run with another fine stroke from the fringe on the 13th to share the lead.

Lewis’ tee-shot into the same hole had been sublime and he tapped home to get his nose back in front but Pepperell was not going anywhere and made the most of the driveable par four 15th to get to 20 under.

Tom Lewis found water off the tee on the 17th and had to hole a stunning 35-foot putt to save par, as a Pepperell bogey on the last made it a two-horse race.

Herbert found water off the final tee to release the tension and while the leaderboard tells the tale of a comfortable victory, the golf told a different story.

South Korea’s Soomin Lee fired a 64 to sit at 17 under alongside Swede Marcus Kinhult, one clear of 2012 champion Shane Lowry.

Sergio Garcia warmed up for the Ryder Cup with a closing 65 to finish at 15 under alongside local favourite Ricardo Gouveia, Frenchman Raphaël Jacquelin, Finn Kim Koivu and England’s Oliver Fisher – who will never forget his week after carding the European Tour’s first 59 on Friday.