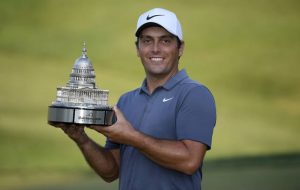 Dustin Johnson remains at the top of the Men’s Golf rankings followed by Justin Thomas and Justin Rose who are placed 2nd and 3rd respectively. Francesco Molinari won the Quicken Loans National and moved from 17th to 16th position. Meanwhile, Bubba Watson and Alex Noren also experienced an upgrade in their ranks and are now placed at 12th and 13th respectively.

Absolute dominance by Francesco Molinari! A Sunday 62 powered him to an 8-shot win at the Quicken Loans National and his first PGA Tour title ?. He’s the first Italian to win on tour since 1947 ??: https://t.co/BZkdXpxQZn pic.twitter.com/C36KVOtZsQ

Francesco Molinari with one of the best final round performances you will ever see today. ?