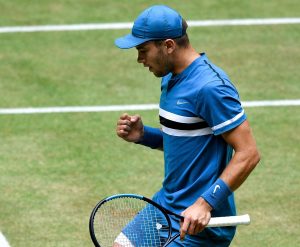 What a performance from the young Croatian- second title of his career, the biggest of his career.#Federer‘s grass-court streak ends on 20, he will also lose the No. 1 ranking to Rafael #Nadal on Monday! pic.twitter.com/VfRGzFzqvX

What a week for Croatia! ??

Qualify for knockout stages of World Cup by beating Argentina 3-0.

And I’m sure Sandra Perkovic did something amazing.

Roger Federer lost to 21-year-old Croatian Borna Coric 6-7 6-3 2-6 in the #HalleOpen final, in what would have been 99th title of his career!
It was Federer’s first loss on grass in 21 games since losing to German Tommy Haas in the #MercedesCup at Stuttgart in June 2017.

What an upset!@borna_coric defeats nine-time Halle champion Roger Federer 7-6(6), 3-6, 6-2 in the @GERRYWEBERWORLD final to lift his second #ATP ?. 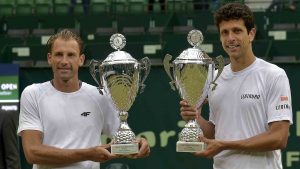 Mischa Zverev hit the ball to the roof, from where the ball hit Melo (after conceding another mini break in the TB) #GerryWeberOpen #KubotMelo pic.twitter.com/6ZOZTGFEpv