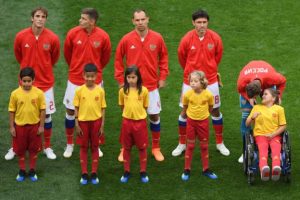 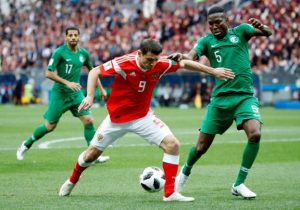 Yuri Gazinskiy will go down in history for #RUS after scoring the first goal of the 2018 #WorldCup ?pic.twitter.com/h7ScBVkrVW

Artem Dzyuba cannot be stopped inside as he heads it in to make it 3-0 for #RUS! #WorldCup

WHAT A GOAL BY DENIS CHERYSHEV OUTSIDE OF THE LEFT FOOT ? #WorldCup #FifaWorldCup2018 #RUS #KSA pic.twitter.com/TAi94vARXq

A SPECTACULAR free-kick gives Russia a 5-0 win in the #WorldCup opener pic.twitter.com/q0LLioAA9w

MOTM: Aleksandr Golovin took the majority of the vote for Man of the Match – hope Jose was watching! Think he could do a job for United? #WorldCup pic.twitter.com/zkslhKC9WT

Russia wins convincingly in the opening match of the #WorldCupRussia2018⁠

DID YOU KNOW: Russia’s 5-0 opening match win at the 2018 #WorldCup⁠ ⁠ is the second biggest victory by a host nation in their opening match in history. #Worldcup2018Russia pic.twitter.com/ciUQyYqrGq

Join allsportspk tomorrow for the next matches of FIFA World Cup 2018.