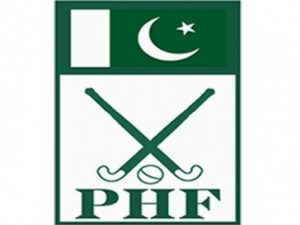 Pakistan went down to Netherlands 4-0, on the opening day of the Hockey World League Semifinal Round at London’s Lee Valley Hockey and Tennis Centre.

Ranked fourth in the world, Netherlands are the top side in this pool. The Dutch played at a relentless pace and showed their colours against the 13th ranked Pakistan by scoring a goal in each quarter.

They completely dominated the first 15 minutes. In the 6th minute, a left side foray resulted in an attempt on the goal and off the rebound, Thierry Brinkman, son of legendary Jacques Brinkman, double Olympics and World Cup gold medallist, put the ball in the cage.

Pakistan began the second quarter in a spectacular fashion and created three chances in the first five minutes. A Dilber attempt came off the post. The game evened out; up and down play was seen. However, the Netherlands doubled the advantage in the 25th minute with Micro Pruijser standing close to the goal availed a wonderful diagonal pass from the left side.

The green shirts again enjoyed a good spell at the start of the third quarter. First Ali Shan and then skipper Haseem couldn’t make use of chances. Later, the Netherlands wrested the initiative and their sustained aggression caused unforced errors by the Pakistan defence. They had three penalty corners in a quick succession. The last of which was converted in the 42nd minute when Mink van der Weerden’s strong flick on the fifth PC  found the top of the net.

The Dutch also had the better of the exchanges in the last 15 minutes. After wasting their sixth PC, a delightful one touch move was finished well by Robert Kemperman to complete the tally.

Pakistan’s second match is against Canada