The match was heading to a draw but Iran won the match, courtesy of Aziz Bouhaddouz who scored an own goal in 2nd half’s injury time. 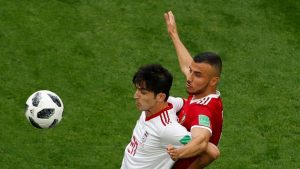 It’s a horrible own goal, you’ve got to feel for Morocco but Iran have just opened this group right up #MAR #IRN

Morocco: “No thank you.”

Iran: “Please! Please score on me!”

Morocco: “I’d rather not. You want one?”

Iran didn’t take a shot in the second half. They also won the game with a goal in the 95th minute.

The gauntlet has been thrown down by Iran.

Iran were never gonna score themselves, they had to get Morocco to do it for them ????