Turkey’s gold rush continues at the 4th Islamic Solidarity games as their women  dominated in the swimming events head and shoulder above the others. 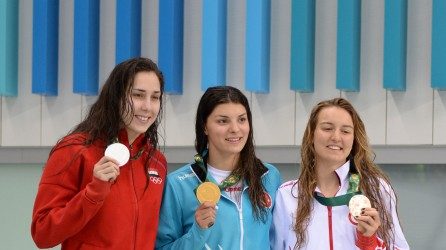 Ilknur Nihan Cakici, Ekaterina Avramova and Nida Eliz Ustundag all struck gold for Turkey in the women’s 100m freesyle, 200m backstroke and 200m butterfly respectively, while their men had to settle for a solitary success in the 4x200m freestyle relay.

The long-distance events remained a dream unfulfilled  for the Turkish women, though, and the only final they failed to win on Monday was a spectacular 1500m freestyle.

Algeria’s Souad Nefissa Cherouati – the only non-Turkish woman to have won gold at the Solidarity Games so far , came out on top of an enthralling battle with Indonesia’s Raina Ramdhani to claim victory, adding to her title in the 800m freestyle on Saturday.

Cherouati and Ramdhani were neck-to-neck heading into the final lengths of a race that lasted over 17 minutes, but the Algerian produced a decisive burst of speed to win by just over a second, with Turkey’s Ecem Donmez only four seconds back in bronze.

In the earlier women’s events, Cakici cruised to victory in the 100m freestyle in 56.27 seconds, while Bayan Jumah took Syria’s first swimming silver of these Solidarity Games.

Bulgarian-born Avramova – who lives and trains in the UK – will be looking to make it a clean sweep of backstroke golds in Tuesday’s 50m final, having already won the 100m race on Sunday.