This is the first match of of Serie A, Match Day 8 of 38. The highlights are appended below the points table. 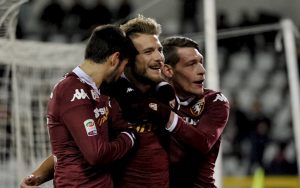 Just like that, Frosinone’s hopes of salvaging anything from this game appear to be over. Baselli taps in to make it 2-0.#TorinoFrosinone

Corner to the far post, bundled over the line by Ciofani and then Goldaniga, but Toro want VAR for offside or a foul on the gk.https://t.co/yTpAQZtvF9 #TorinoFrosinone #SerieA

A player scores a goal, pulls his shirt in celebration
Goal gets cancelled for offside, Player gets a yellow card??? #TorinoFrosinone

Berenguer with a stunning effort into the top corner. 3-2 Torino, and I think there are more goals to come!#TorinoFrosinone