These are the first match of LaLiga, Match Day 8 of 38. The highlights are appended below the points table. 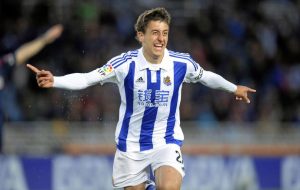 Mikel Oyarzabal scored twice from the penalty spot to guide Real Sociedad to a 3-1 win at Athletic Bilbao. #SSFootball

Mikel Oyarzabal – I’m a huge fan of this player. His second penalty puts Real Sociedad 3-1 up against Basque rivals Athletic at San Mames.

Real Sociedad pick up their 2nd away win on the bounce at San Mamés after an Oyarzabal double#AthleticRealSociedad https://t.co/5VOV5acHdW