This is the first match of Match Day 3 of 38. The highlights are appended below the points table. 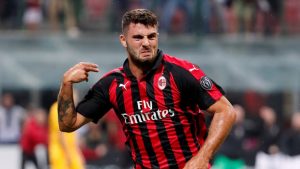 Sorry mate we are going to lose to roma because gattuso will never learn, Biglia is easly disposes in the CDM this 4-3-3 is never good for higuain because it isolates him as a top 9,Hakan always run in as an CAM b/cos that is his normal position use 4-2-3-1 for GOD sake ?

Little ropey in the second half, but Milan starting to become a delight to watch when they attack. Patient, composed but move with purpose too. Brilliant Higuain assist, great Cutrone finish to win it. Delighted for Gattuso and players to bounce back after Napoli. #ForzaMilan

VAR has pulled back two goals from the Milan / Roma game. Each team with one pulled back and still locked in a 1-1 game.#MILROM pic.twitter.com/2JdHklzfGb

“Missing out on AC Milan broke my heart!”

Had Burnley qualified for the #UEL group stages, they’d have had a trip to the San Siro.