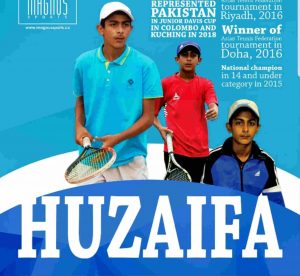 In the competitive world of sports there are many young sportsmen and women, who have the talent but do not reach the levels they can. According to Allsportspk survey the main reasons are – lack of timely publicity, recognition and financial support.

Allsportspk through the “Talent Spotlight” series takes the initiative to shed light on potential sports talents who are within the recognizable performance radar. However, they need the public, media and sponsorship acknowledgement and recognition that they deserve!

The Allsportspk Talent Eyes in this article have spotlighted a tennis star who’s particulars and credentials are:

Huzaifa started playing tennis at the age of 4 years in the small town Okara, where his father Mr. Faisal, was posted while serving in the Pakistan Army. His initial link with Tennis was established while accompanying his father to the courts.

According to Huzaifa “Initially it was for fun. However, due to the style and elegance of the sport and especially having seen the major tennis stars on television, he started to develop the ambition to be like one of them.”

As the interest grew, Mr. Faisal also realized that Huzaifa had the potential, so he started to seriously focus on his coaching. The training took a serious turn in 2010, when the family moved to the town of Mangla. It was after this serious and professional training that in 2011, Huzaifa for the first time won a Under 10 title.

According to Mr. Faisal, Huzaifa has progressed due to having been trained primarily on the hard court surface and ultimately also on clay. Elaborating on why not the grass courts? He explained that in tennis the grass surface does not help to develop a players game. Secondly, the ball bounce factor is the main issue and thirdly, most of the major tournaments are played on hard and clay courts.

After having been trained by his father during the initial years, Huzaifa had the opportunity to also be trained by international professional coaches, which included:

Both the coaches, believe that Huzaifa has the potential to reach the top of tennis world circuit. However, it is only possible if he is given the conducive training environments.