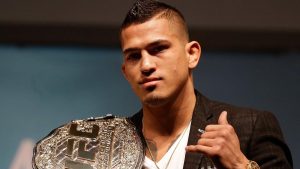 Previous UFC Lightweight Champion, Anthony Pettis had an outright confrontation with the returning Tony Ferguson at UFC 229 and regardless of enduring a misfortune on account of ‘El Cucuy’, Pettis stays certain as ever.

In an ongoing Instagram post, Pettis chose to get out a best Welterweight contender and prodded possibly climbing to 170.

Having made his UFC debut in 2011 against Clay Guida in a triumphant exertion, previous UFC Lightweight Champion Anthony ‘Showtime’ Pettis contended in extraordinary compared to other UFC battles’ of 2018 when he squared off against Tony Ferguson at UFC 229.

Pettis, having endured a broken hand amid the battle, wound up losing the fight yet absolutely did not go down without a battle and it currently appears as though the previous Lightweight Champion is good to go to move one up to the Welterweight Division.

Heard somebody is looking for a fight. What you guys think? Take my talents to WW and take on the boy? Comment ⬇️ let me know if y’all get excited for this one #showtime #lovethis #forthefans #teampettis

Via social media, Pettis tended to the way that ‘Wonderboy’ has been anticipating making his arrival to the Octagon and ‘Showtime’ would not see any problems with inviting him back to the enclosure by going one up to 170.

Starting at the present moment, neither Anthony Pettis nor Stephen Thompson’s next battle in the UFC has been affirmed, in any case, fans unquestionably would not see any problems the two warriors making a terrific come back to the Octagon in 2019 and surely wouldn’t see any problems with seeing them clash in the Octagon not long from now.

The lay relies upon the UFC the executives, starting at this moment, the Welterweight Division is an outright upset any semblance of Tyron Woodley, Colby Covington, Kamaru Usman, and new underwriter Ben Askren returning and-forward with one another. Adding one more contender to the division probably would not be the best result however it will get us a bit nearer to seeing a strong battle among Pettis and Wonderboy.