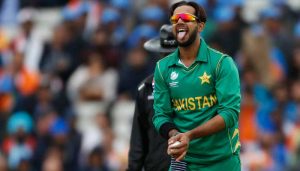 Weeks before the Asia Cup 2018, Pakistan all-rounder Imad Wasim has failed to pass the YoYo test. While his colleagues Hasan Ali and Shoaib Malik cleared with flying colors. Pakistan are yet to report their squad for the Asia Cup, however, the all-rounder will get another opportunity to clear the test before the declaration of the squad.

What is the YoYo Test?

The test includes the placement of two cones to separate two lines, that are 20 meters apart from each other. The player needs to keep running between the lines and turn only when the beep goes off.

The pace of the signals stimulate after every minute and if the player does not achieve the line in time, he should get up to speed inside two more beeps.

Under the Pakistan Cricket team’s head coach, Mickey Arthur, fitness has been one of the key criteria for the national team and a criteria of 17.4 has been set as the base in the YoYo test.

17 of the 18 Pakistan players who are in the preparation camp at Lahore experienced YoYo tests and cleared the it, however, Imad Wasim missed the mark as he oversaw only 17.2. However, he will get another chance to clear the test on 4th September, Tuesday.

The 29-year-old participated in the Caribbean Premier League 2018 for the Jamaica Tallawahs, where he got 6 wickets in 7 matches with an economy rate of 6.74. With under about 14 days to go before the beginning of the Asia Cup, the all-rounder will look clear the test and advance into the Pakistan squad for the Asia Cup.

UAE will host the Asia Cup 2018, which was at first planned to be facilitated by India. The occasion gets in progress on September 15 while Pakistan’s first round of the competition will be on September 16 at Dubai against the winner of the ongoing Asia Cup qualifiers.

Imad Wasim did not pass the initial fitness test, short of two points, will proceed to a second one tmrw. MHafeez was unable to attend the fitness test procedure – Shahzad Malik, ARY Lahore pic.twitter.com/TP16QQ4Acn

Among the other people who cleared the test was Hasan Ali, whose score of 20 is even superior to the current Indian captain, Virat Kohli, who is generally thought to be among the fittest players in contemporary cricket.

A few Pakistan players cleared the YoYo of 17.4 easily and in spite of the fact that the number is lower than it is for any semblance of England and New Zealand.

Imad Wasim failed the YoYo test by 2 points and will give test again tomorrow.
Mohammad Hafeez unable to attend the test.
All others passed the test, passing mark was 17.4 . Hassan Ali top-scored. #AsiaCupCamp