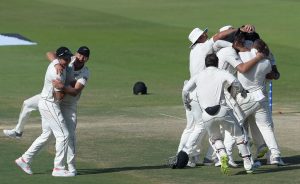 Pakistan endured one more humiliating breakdown to go down to New Zealand in the opening Test. Pursuing 176 to win, Pakistan looked solid contenders for the win and in spite of losing three early wickets, Azhar Ali and Asad Shafiq had reestablished harmony. Their 82-run stand took Pakistan to 130/3 preceding Shafiq died for 45. The condition at this stage saw Pakistan requiring 46 runs with 6 wickets close by.

Azhar Ali (65) remained up until the conclusion to attempt and steer the side home as Pakistan endured a hopeless lower arrange crumple with three players returning after another with ducks to their name. With the DRS call going in New Zealand’s support, Azhar turned into the last to be expelled and the Kiwis won by four runs in a thrilling finish at he Sheik Zayed Stadium. Expansive segment of the credit would go to the Man of the Match Ajaz Patel who asserted a fifer in the 2nd innings.

It’s all over for Pakistan! Azhar Ali is trapped in front of the stumps and New Zealand have sealed an unbelievable win by four runs!

I just read about a cricket match wherein the New Zealand Black Caps had a miracle test win over Pakistan with an incredible comeback. Apparently something “phenomenally brainless” occurred during the match. Humbling to read something with no comprehension of what was written.