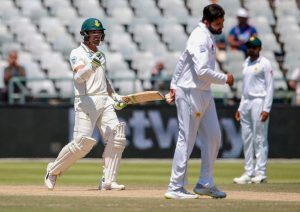 At last, it was a truly simple current task for South Africa and they reached the target with with much solace. Dean Elgar and Faf du Plessis made the target of 41 runs look easy as they finished the job to win the match by 9 wickets.

Thenis de Bruyn replaced the injured Aiden Markram as he was advanced up the batting order. However, the right-hand batsman was dismissed by Mohammad Abbas at an opportune time.

South Africa captain Faf du Plessis has been suspended for one Test and fined 20 per cent of his match fees, while his players have been fined 10 per cent of their match fees, for maintaining a slow over-rate during Cape Town Test against Pakistan(ICC)

The batting problems are so obvious that they don’t even need to be mentioned. However, just watching the scorecard of 3rd test India vs South Africa. India scored almost similar runs as Pakistan in both innings but managed to bowl out SA on 194 and 177.https://t.co/jeQvKeb1SE

In the morning, Pakistan bowled very well, and dismissed South Africa fairly easy! The game was moving into a good contest! Pakistani batsmen simply failed to push on. The 150 run partnership should have been a proper platform, yet poor shot selection, and technique cost them!

Disgusting performance by Pakistan. There was no game plan and preparation whatsoever. Who is responsible for this shambolic display against South Africa? #BloodyHopeless #PAKvSA