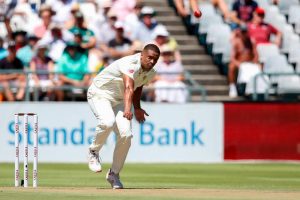 Vernon Philander wreaked devastation as he expelled Shan Massod and Azhar Ali in sequential deliveries, as Pakistan completed the day at 17/2. Imam-ul-Haq, who is batting on 10 alongside Mohammad Abbas will continue the Pakistan innings on Day 2. Pakistan are as yet trailing by 245 runs and the guests would trust that they do not lose any wicket in the principal session of the match.

Prior in the day, South Africa endured a fall in the last session as the hosts could just oversee 262 in their first innings. The Proteas lost seven wickets in the last session as Pakistani seamers packaged up the remaining batsmen with hardly a pause in between. Faheem Ashraf scalped three wickets, while Hasan Ali, Mohammad Abbas and Mohammad Amir shared two wickets each. Among the South African, Aiden Markram was the champion batsman as he scored 90 out of 124 balls.

He’s walking off. Not good news for Pakistan. He was on top of his game in this session and the visitors would have liked him to stay on the field to try and bowl out South Africa today. Hope it is not serious. For now, Ashraf to complete the over.. #SA… pic.twitter.com/jNckpfSu1s

What a day of Test cricket!

Which side will be the most pleased with their day’s efforts?#SAvPAK pic.twitter.com/Z8pFyB5DPn