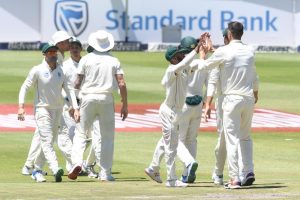 Towards the finish of Day 2, South Africa are in a leading position, courtesy of Hashim Amla and Quinton de Kock who have expanded their lead by 212 runs  Amla is unbeaten on 42 while de Kock is unbeaten on 34.

Prior in the day, South Africa secured a 77-run first-innings lead over Pakistan, after Proteas leading wicket taker in this series, Duanne Olivier took his third five-wicket haul.

Nonetheless, South Africa’s poor showcase in the field remained the feature of the day, as they dropped 5 catches, in the first hour of the opening session.

#SAvPAK
Pakistan vs South Africa
Most runs and most wickets of the series. pic.twitter.com/9RFITnZe1N

That’s too easy, South Africa can lose even after setting up the target of 500+ because the greatest batting line up of all time in world cricket in Pakistan scares any bowling team so they can chase literally anything down let alone 500+, that’s the damn real reality eh!? ??

If Pakistan restrict South Africa under 300 lead like 270 or 280, they still has a chance. Can they do it is a big question but this test may end on fourth day if not three.

Sarfraz Ahmed rues ‘three bad shots’ in Pakistan’s collapse: He included his own dismissal among the avoidable ones that he felt had cost Pakistan the chance of getting close to South Africa’s first-innings total https://t.co/TwtmGYgjzh pic.twitter.com/qgXsgC1I0A