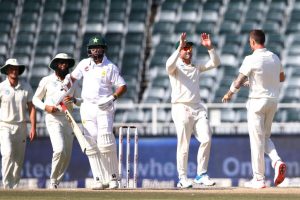 The pair included a 67-run partnership for the 1st wicket. In any case, Dale Steyn struck twice in two overs to drive Pakistan on back foot. Imam was the first batsman to be dismissed in the twentieth over.

Shan likewise neglected to oppose the South African assault, as he missed the mark in the 24th over. Duanne Olivier gave guests the third blow as he expelled Azhar Ali when he was on 15.

Prior in the day, South African wicketkeeper-batsman Quniton de Kock finished his fourth Test century before South Africa were dismissed for 303. The left-hand batsman scored 129 runs in 138 balls, which included 18 fours and one six.

Pakistan’s first 50 runs opening partnership in South Africa for 16 years! The previous one was 20 innings ago between Saleem Elahi and Taufeeq Umar in year 2002. #RSAvPak

Needing 381 runs to win, Pakistan were 153 for three at the close on the third day. pic.twitter.com/XNZIJ1k0IR