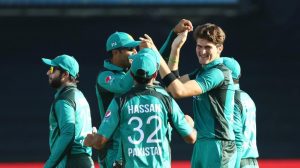 Imam-ul-Haq’s brilliant innings of 71 runs helped Pakistan secure an 8 wicket win over South Africa in the fourth ODI. The batsman, who scored a century in the past ODI, scored 71 runs and developed two half century partnerships with Fakhar Zaman and Babar Azam respectively.

Prior in the day, Usman Khan’s amazing fast bowling spell helped the guests bowl out South Africa on 165. He grabbed three wickets in the 38th over of the South African innings as the Proteas lost the last six wickets for only 24 runs.

In the wake of choosing to bowl first, Pakistan got off to a splendid beginning. The seamers took two brisk wickets and confined South Africa to 32/2 in the initial 10 overs. Be that as it may, fifties by Faf du Plessis and Hashim Amla indicated some fight from South Africa. After they were expelled none of the South African batsmen could oppose the Pakistan bowling assault.

Man Of The Match: Usman Shinwari

Pakistan win by eight wickets with 111 balls to spare!

A convincing win for the tourists, who restricted South Africa to just 164 in their innings.

Congratulations to Pakistan team on a Memorable Victory over South Africa in #PinkODI at Wanderers @realshoaibmalik Outstanding Captaincy by him I hope he will became permanent ODI Captain of Pakistan so I Hope for the best for the PAK for Series Decider at #Newlands #PAKvSA pic.twitter.com/jypeXnobZD

Pakistan came in this match with only one win in 9 ODIs in Johannesburg and South Africa was undefeated in the last 7 ODIs at the ground. Against all odds, Pakistan win by 8 wickets. Truly an unpredictable team! #RSAvPak