This is the next match of Premier League, Match Day 9 of 38. The highlights are appended below the points table.

Match 1 of 10: Everton vs Crystal Palace 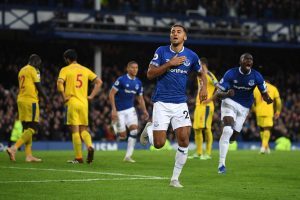 Nice to have a Sunday afternoon at home with @Everton on the box ! Great looking starting line up! @SkySportsPL

André Gomes –
2nd most passes today and the 2nd most forward passes by an Everton centre midfielder this season.
??? pic.twitter.com/CDHjZcdVZf

Rooney: “Winning my first Premier League title was huge. Winning the FA Cup. As a fan it was the only trophy I got to see Everton win. I was at the game and I felt I had a connection with the cup so to win it as captain and lift it at Wembley was special.” #mufc [Men in Blazers]

Since joining on the 5th January Cenk Tosun (7) has scored more goals in the Premier League than any other Everton player.

SCOUT: The four players involved in @Everton‘s two goals are all owned by fewer than 2.5% of #FPL managers#EVECRY pic.twitter.com/DuzPzNxBcl

1st time 2 subs scored in a PL game for Everton since March 2014 pic.twitter.com/OXGfCZVj9a

All the action at the end at Goodison Park today. pic.twitter.com/3HdfLD1kNE