This is the first seven matches of the Premier League, Match Day 12 of 38. The highlights are appended below the points table. 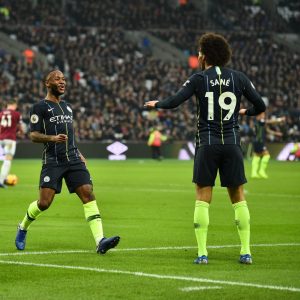 FULL TIME | Another win, another three points and another supreme performance!

.@ManCity have scored 4+ goals in a PL match on 2️⃣1️⃣ occasions since Pep Guardiola was appointed manager in July 2016.

Love watching Tottenham when they play like this. Only Manchester City have a higher ceiling of performance in an individual match when it all clicks. Sensational.

Jorginho
1. No left foot
2. Scared to show for the ball when the pressure is on
3. Can’t time a tackle properly

Silva, Sterling and a Sane double earned the champions a comfortable 4-0 win at West Ham.

Match 2 of 10: Everton vs Cardiff City 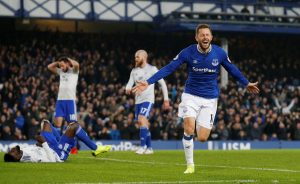 Really good game of football from both sides. A performance to be proud of, despite the result ? pic.twitter.com/WnvkmW4Aip

? | Gylfi Sigurdsson in the Premier League for Everton:

Marco Silva is really getting the best out of him. #efc pic.twitter.com/R1XTzB2TkK

Gylfi Sigurdsson scores the only goal of the game as the hosts dominate at Goodison#EVECAR pic.twitter.com/W3TsRddRBz

Here’s how the Premier League looks at half time!

Match 3 of 10: Brighton vs Leicester City 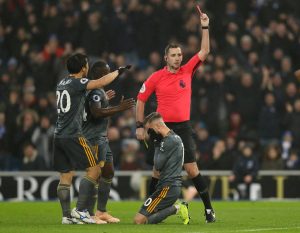 Substitute Jamie Vardy strikes from the spot to pinch a point for the 10-man Foxes after Glenn Murray’s opener #BHALEI pic.twitter.com/g18hthOBCC

Oga Sammy, I hail u with double hand. I got the Brighton vs Leceister match prediction correctly. 4give some us wey no dey use to modern facilities.I say make I stop there make I no go press spoil 4my phone. I go understand if una disqualify me anyways 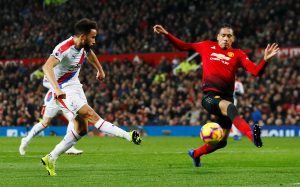 Well done @D_DeGea You must be so proud of your self, team and manager. You have all successfully ruined the club you’ve played for. And soon you will be gone. Bye bye @D_DeGea

Manchester United fans know who’s to blame for Crystal Palace draw: Man Utd were held by Crystal Palace in their first Premier League fixture back after the international break. https://t.co/QpsmTXIKup

Very proud of these 250 matches in the @premierleague Thanks @ManUtd and to you for your support always ???

Am a @ManUtd fan and I was very disappointed ? about todays result but the only thing am happy ? about is that @D_DeGea got his second cleansheet in the @premierleague today…#GGMU

For the last three matches, move on to the next page!