This is the last match of Match Day 2 of 38, that were held on 18th August 2018. The highlights are appended below the points table. In case, you missed the highlights of the first 6 matches click here.

Match 10 of 10: Crystal Palace vs Liverpool 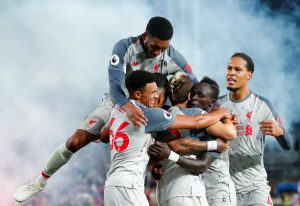 9 shots from Liverpool in that first half! That’s more than we’ve had in the whole of Mourinho’s reign

Just caught the 2nd half of palace-Liverpool, and despite the score line, palace looked good. Even when down to 10 men, defended as a team, denied Liverpool space between the lines, and worked some lovely chances, building up patiently. If they keep playing like that, top half

GOAL!!! YES Sadio! Rapid counter attack from the Reds. Mane rounds the goalkeeper and slots the ball into an empty net. ?