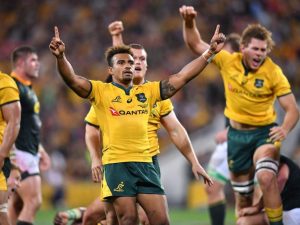 Australia beat South Africa 23-18, and eased up the pressure on their mentor Michael Cheika in the ongoing Rugby Championship 2018.

For Australia, Michael Hooper and Matt Toomua scored tries, while for South Africa Mbongeni Mbonambi and Makazole Mapimpi did the same, and took a 18-17 half-time lead in Brisbane.

However, the deciding factor were two Toomua penalties that won the match for Australia, as the hosts held off late pressure.

Australia had gone into the amusement, on the back of two thrashings by New Zealand and 6 losses from 7 games.

“ We are a drinking and bonking nation…let’s stick to that?. Soccer, rugby and cricket is not for us. In fact we claim to be a sports nation, but we are not ?????.” – Archbishop Desmond Tutu on South Africa

Moreover, as a result of injury, Cheika’s side were likewise without David Pocock and star full-back Israel Folau. And additionally, they endured a late withdrawal when lock Adam Coleman became unavailable for family reasons.

In any case, Australia figured out how to anchor their first win in week three of the current year’s four-nation series.

This is the worst half of rugby that Australia and South Africa have ever contested. Woeful. #AUSvRSA